Leadership, robotics and how it affects humans – hot topics at SIME 2016

Comprend attended SIME, Northern Europe's largest conference about the Internet and digital opportunities. Here are a couple of highlights on the main topics; leadership, robotics and how it all affects us humans. 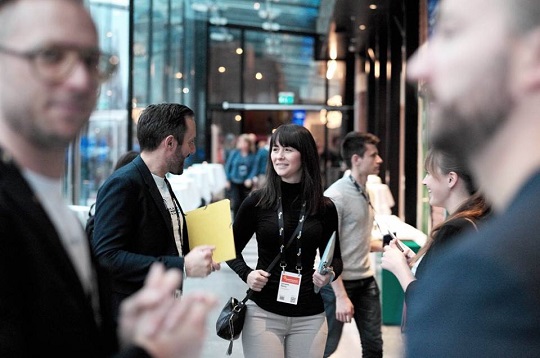 A couple of weeks ago it was time for SIME week in Stockholm and what a week. SIME is Northern Europe's largest conference about the Internet and digital opportunities. The two-day conference started off with an inspirational introduction on our digital past and possible future by host Ola Ahlvarsson. This year Ola had CNN tech correspondent Laura Segall co-hosting the conference, and being American, there were of course thoughts and discussions about the recent outcome of the presidential election. More on that later.

The main topics which intrigued us the most were leadership, robotics and how it all affects us humans which will be posted in separate posts here on the blog. But there were a lot of other points of interest during the conference. Let's have a look at a couple of them.

I followed the MedTech stream throughout the conference and attended the workshops and speeches on the subject. Robin Farmanfarmaian, author of "The Patient as the CEO" and VP of Invicta Medical, spoke very passionately about “the era of the patient” and the importance of taking control of your own health.

It wasn't difficult to be amazed by the medtech future of companion robots for the elderly, AR/VR for pain control or anxiety treatment, ingestibles and smart wears automatically sending your data for analysis, 3D printed organs and prosthesis, cheaper DNA tests and much more. According to Tim Kneen, Executive President Europe at Merck, thanks to these tools many heart attacks and strokes could be predicted and prevented years before they occur. The un-answered questions were if we would want to pay for a treatment for something that hasn’t happened to us (yet)? And what will be the role of a doctor in the future when AI already diagnose correctly more times than human doctors?

A philosophical subject which was discussed was that up to now death has been something definitive. Today there are theories discussing living forever. In only 150 years we have doubled our average age span and today we do not dye of aging but of diseases.

The presidential election in the US

On this topic, Richard Greene, communication strategist and public speaking ninja was not surprised by the accomplishments of US president-elect Donald Trump. According to Greene, Trump ticked a lot of boxes within public speaking when he spoke without notes, in clear terms, promoting simple and uncomplicated message with passion which made people feel that what he was saying was authentic.

Digital marketing based on data

Today companies are collecting a tremendous amount of data. But is it used correctly? Research show that 95 % of all data is never even used. One of the problems when collecting data within big companies was that there was no overall strategy on how to collect the data which led to different departments collecting in different ways in different format and with different rights to use. So to use data in a more efficient way the first step would be to make sure that it is shareable, at least, within your company.

When dealing with data, companies should focus much more on finding the relevant space between what the audience want to hear and what you want to say. Find the influencers and use them to communicate your (relevant) message. And don't get stuck! What is relevant now is probably not relevant in a couple of years.

Finally, according to SIME themselves the conference is about how digital opportunities can convert into new business and a better world. The first part about new business was surely there, but I kind of missed the better world perspective. There were some glints here and there, but I would have like to hear how all the super interesting things VR, AR, AI could achieve and make the world more sustainable.