One often-repeated piece of advice is to think mobile, but there’s more that a company can do to make themselves attractive to jobseekers. This spotlight report highlights some of these options. From the open comments and interviews for our recent Careers research round, here are some of the most interesting ideas on how to improve the application process for jobseekers.

Bring jobseeking up to speed with tech

Technological advances have made it easier than ever to create, share, and view content, but this has not yet made a full impact on the way we apply for jobs. There are plenty of platforms that aim to make job applications easier, to some extent. The most popular model involves holding on to your CV and making it possible to apply with a button, but the easiest way might not always be the best way – the standard way of submitting a CV and cover letter just isn’t for everyone.

Some of our respondents and interviewees were keen on the option to apply through video. A video can serve as a replacement for the cover letter, where applicants traditionally present themselves and talk about why they are applying to the job. This method can also complement the CV and the cover letter as a way to breathe life into plain text. Since applicants only need to use a smartphone, such a video can be easily made and shared. The trick is to not make this mandatory: the same way plain text isn’t for everyone, video might not be either.

The various hurdles jobseekers must jump over on their journey to applying for a job were another recurring theme. One solution that stood out amongst the rest was asking applicants to upload their CV, but also to copy/paste the information into a form on the website. This process clearly helps make the screening process easier for companies by providing a quick overview, but this extra step creates double the work for the applicant and slows down the process.

“My biggest pet peeve is submitting a CV and then finding myself asked to complete a form asking me for the same information that was included in my CV (previous work exp, etc).”
- Employee which is happy with their current job, UK

Chats and the benefits of anonymity

Applying means that you might need to engage with a lot of questions, on both ends of the process. Since applying for jobs and looking for the right talent takes a lot of time, there are benefits to keeping communication channels open.

About half of our respondents were receptive to using a chat service to ask questions to the company. Out of those that said yes, a majority said that they would prefer it if this was an anonymous process. The main advantage is that this provides an opportunity to ask sensitive or uncomfortable questions, without the need to put themselves in the position of a “difficult” candidate.

According to jobseekers, questions about travel required by the job, certain kinds of benefits and health care packages, flex time, and the like can be deal breakers or something they need to plan for. Answering these questions ahead of time, before they even start working on the application process, will save both parties time.

Keep in mind that a contact person for the specific job ad is still seen as important, so think of the chat as something to complement, rather than replace, an email or a phone number.

"One thing that I have been thinking about is the chat. As you have it everywhere, why not for jobs? An anonymous chat where you could ask things that you don’t want to ask in person, over the phone or via email."
– Passive jobseeker keeping eyes open, Finland

It would also give respondents a chance to quickly access other types of information as well. A topic that respondents were interested to know more about was their potential future team: what kind of team it is, titles, key competences, etc, and this can also help them choose skills to highlight in their application.

Would you like to ask a company questions through a chat? 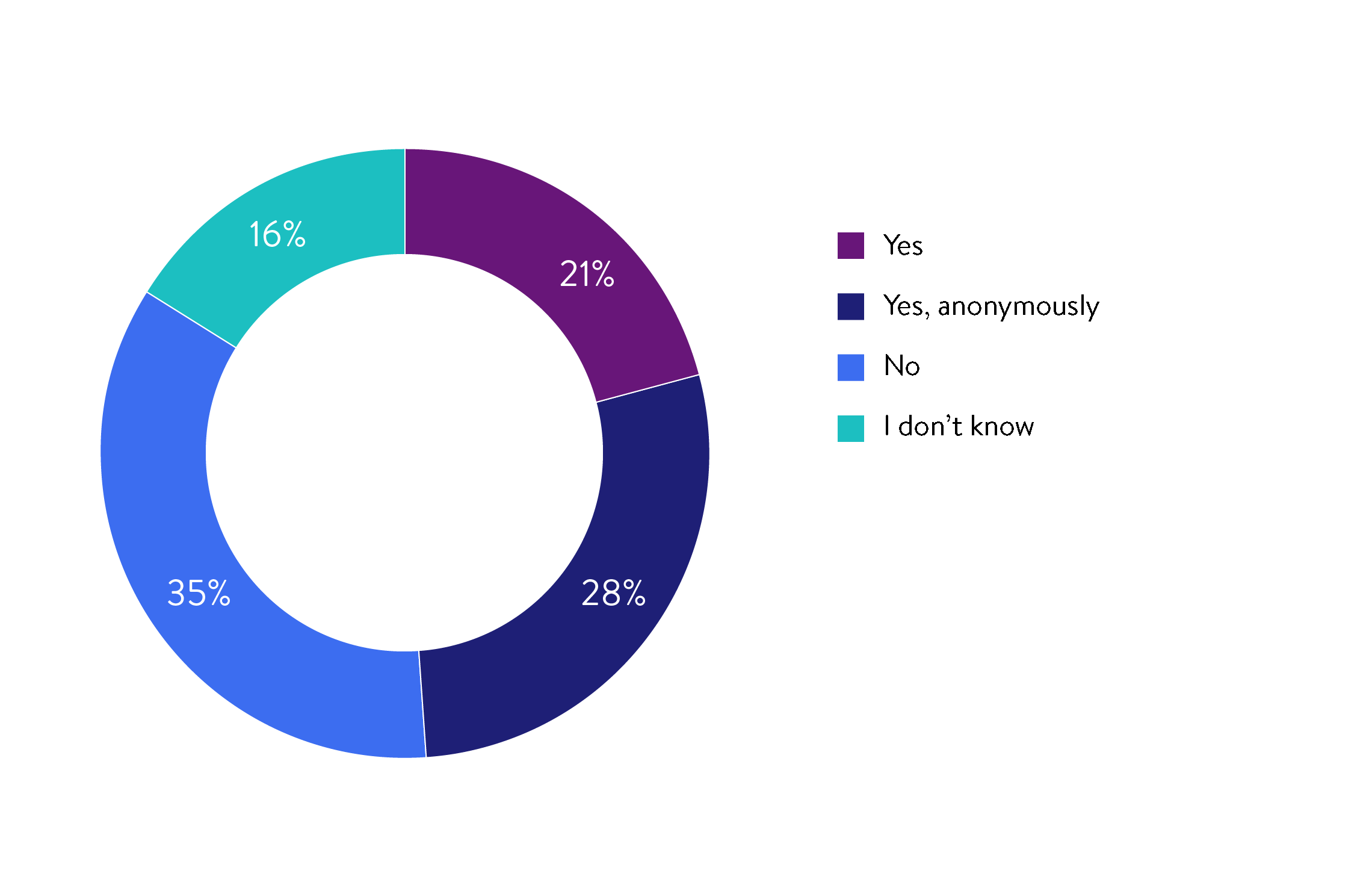 Jobseekers see the company’s policy on diversity and equal opportunities as highly important. In fact, it’s one of the most popular pieces of information when it comes to describing the workplace and its culture.

On this topic, our interviewees also brought up the issue of anonymous applications. As seen in Clauda Goldin's and Cecilia Rouse's working paper "Orchestrating Impartiality: The Impact of 'Blind' Auditions on Female Musicians", it’s a proven fact that when applicants are anonymous, gender discrimination goes down.

Symphony orchestras have done this in so-called “blind” auditions since the 1970’s. The person who auditions plays behind a screen so that the jury will not be biased by anything beside the craftmanship. With the technology available today, screening applications sans personal details isn’t a huge undertaking, and, in turn, this would help reduce gender discrimination in this part of the process. However, this doesn’t need to be more complicated than removing personal data from CVs – the interview step would be a strange moment for everyone involved if voice scramblers and screens were to be utilised.

Beyond describing its work environment and culture and values, a company can present itself in many other ways. By talking about their ongoing projects, they can describe the day to day work in a trustworthy way and letting an employee describe the project also puts a new spin on the classic testimonial format of describing a job role and what makes it great.

If no project is a good fit for this format, another way of showcasing the company would be to present the company’s products. For example, Spotify asks some of their employees to discuss the ten most important songs in their life. This could also be shown as a clip following a co-worker around on their job, presenting the company products along the way. This way, what the company takes centre stage and reveals employees’ passion for their job, painting a portrait of the real people working in the office.

Job ads often tend to include a list of required skills and a short description of the type of person the company is interested in recruiting. From the open comments, we can see that this does not seem to be enough. Emphasis on soft values in a person would be a great help in attracting the right talent, either by being more articulate in how the personality is described or taking inspiration from Heineken: making an interactive game to help applicants understand the company and where they would fit within the organisation.

Read about career sites in our blog

Learn more about Webranking by Comprend on comprend.com/webranking or contact us directly:

Except where otherwise noted, content in this report is licensed under a Creative Commons Attribution 4.0 International license. Feel free to share the content, but please refer to Comprend. Articles by Anna Dunder, Chris Henson and Timmy Fredriksson, Comprend.