Comprend’s backend developer Petra took the opportunity to attend Episervers flagship conference Ascend in Las Vegas this year. These are the things she learned and brought back with her to Sweden.

Episerver Ascend is a big and lavish 3,5 days long conference that's held at the luxurious hotel The Cosmopolitan in Las Vegas. The conference was really well organised and the venue was impressive with lots of good food, drinks, breaks and plenty of time to mingle with other attendees in the dedicated partner zone. There were also mixers that were thrown at the end of each conference day.

Ascend started with a partner day and education sessions for developers and marketers. I attended the partner day which focused on partnership and sales. There were some good information and talks about how Episerver’s products and services change frequently based on feedback from partners and customers to fit the markets needs and to be more consistent. There was also an interesting talk from Joakim Holmquist (Director of Digital Marketing) and Jessica Fardin (Director of Global Marketing) about how they work with target marketing spotting decision makers as well as how and why Episerver want to do more joint marketing and VIP events together with partners.

On day 2 the conference started with great keynotes from Scott Hanselman, Mel Robbins and the Chief Marketing Officer at Episerver James Norwood. The Episerver keynote featured a demo from Allan Thraen on using AI with Episerver. This topic really stood out for me throughout the conference as Episerver are seen to be doing great work with machine learning since the acquisition of Peerius last year. The product is now called Episerver Perform and is using Microsoft Cognitive Services which is a machine learning platform in Azure together with bot technology. Here is a selection of things that can be accomplished in the Episerver platform using AI:

Day 2 and 3 continued with a bunch of sessions and labs for developers, marketers, tech leaders and business leaders. I think whatever your role, there was something there for everyone. As I'm a developer I mainly attended the more developer focused sessions and labs, some were okay and some were really good. 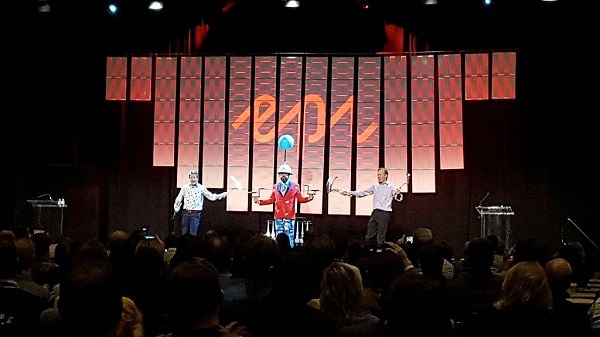 The labs and sessions were each 45 minutes long which left me feeling that they had too little or a bit too much information crammed into them. The labs with too much information were fast paced and were probably too complex to try and handle in 45 minutes. So you didn't get much out of them. I think that Episerver should definitely keep the labs for next year because they’re a good experience but perhaps they could be made longer with fewer of them instead.

The sessions I attended where pretty good in general but the ones that were most interesting where sessions about using Find in an agnostic way, personalization with Find and Find together with AI. Another session which I enjoyed was about the Episerver Campaign, which seems like a good campaign tool to use.

One thing that I didn't know about Episerver was that they drive a campaign called Digital 99 with the purpose of promoting women in IT, Tech and Marketing. Digital 99 is also the name of a podcast series about digital leadership featuring women. So naturally there was a panel of 4 women on stage that were discussing technology, data, AI, more specifically the view on the role of data in organizations to drive customer experience and the impact of AI. It was encouraging and inspiring to see that something might be happening in the world of IT driven by women. As I was not the only one who hadn't heard of Digital 99, it would benefit Episerver to market it better to include a wider audience. Episerver as a huge global company should be recognised more for the work they´re doing with this important topic.

For more event and conference insights, read our posts on: