As part of ongoing efforts to make Webranking more relevant to companies and stakeholders alike, Comprend presents the third instalment …

As part of ongoing efforts to make Webranking more relevant to companies and stakeholders alike, Comprend presents the third instalment in a series of sector reports. This time, taking an in depth look at the European energy sector. Based on 2014-2015 data, the aim of the sector analysis is to provide a direct peer group comparison, highlighting the most pertinent issues affecting the sector, in this case looking at geopolitical risks, climate change and human rights issues.

The report reveals that the 34 European energy companies analysed scored just above the FT500 Webranking average at 41.9%, and just 3.1 percentage points behind the chemicals sector – which came in first place.

Those passing the test come from a mixture of European countries, with Italian energy giant ENI winning the top spot in this year’s assessment of digital corporate communications with 87 points, followed by Spain’s Respol (67.6), with Finland’s Neste Oil (60.2) securing third place. The most improved this year was Spanish company EDP Renováveis which improved by 16.4 points. 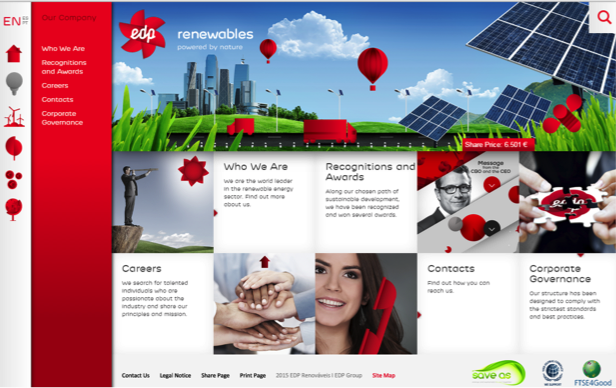 Almost half of the companies improve their score from last year

Considering 50 points out of 100 as the threshold at which companies respond adequately to market requirements, fewer than 1 out of 4 of Europe’s top 34 oil and gas companies passed the test in 2014. At the other end of the scale, 24% of companies scored less than 30 points, meaning that they do not present the minimum content expected by the market. Despite the difference between the best and worst performing oil companies, there are still positive signs in this year’s Webranking, as ever more companies invest in digital communications. For example, 47% of companies improved their score and the industry came out fourth in the sector comparison.

On a country level, the sector is concentrated in few nations: nearly half of extractive companies hail from Norway, Russia and the UK, with British companies outpacing their competitors in terms of transparency and dialogue.

Read our other published sector reports on banking and insurance

For further information about Webranking and our company reports, contact Helena Wennergren at helena.wennergren@comprend.com.